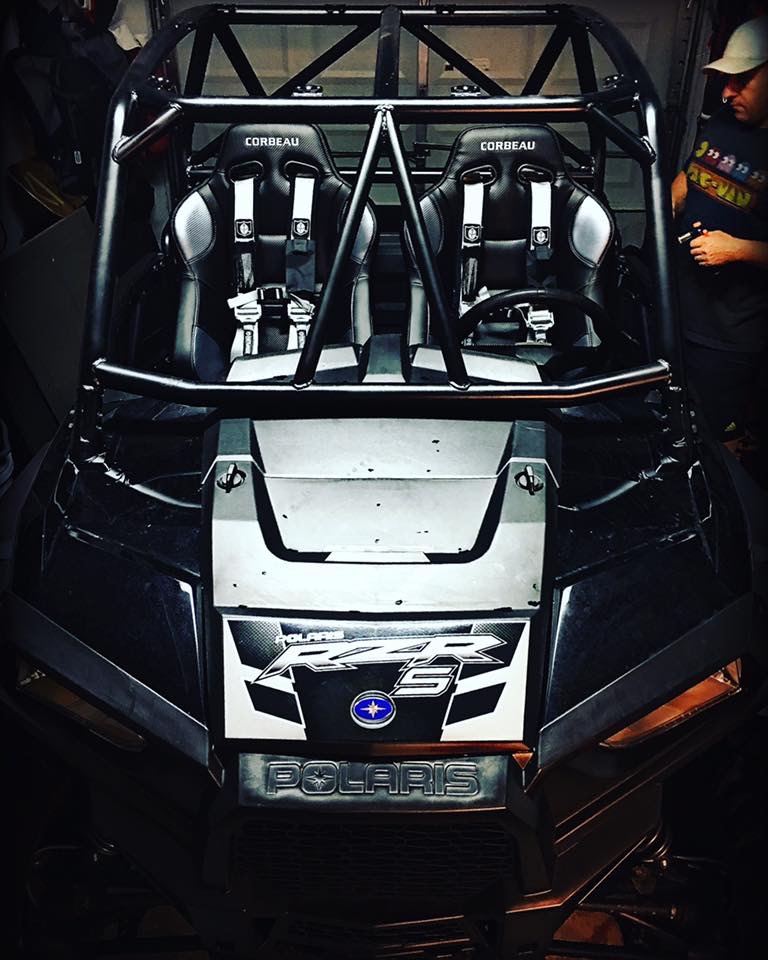 Side-by-side UTV’s are becoming the “must-have” toy of the decade.  I don’t know about where you live it seems that they are everywhere around here.  And, naturally, as soon as everyone has one the customization starts–mine has to be better than yours!

When you’re making something uniquely yours it only makes sense to take a practical approach.  A set of shiny wheels look good but they are limited in what they can actually do for you. Corbeau must have known that and so they came out with an upgrade that couldn’t be more useful in a sport that has you spending extended amounts of time riding over rough terrain: side-by-side UTV Seats for the Rhino, RZR, and Wildcat! 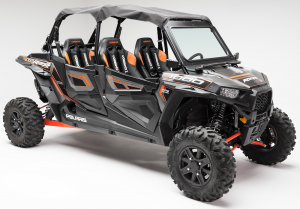 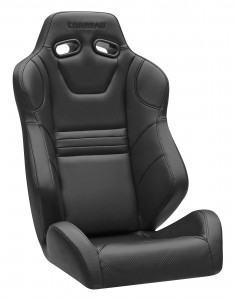 Okay–I admit it.  I’m sold on the SXS Pro.  But once you put a set of these in your RZR or Wildcat you are going to feel the same way. While the original RXP seat for the Rhino is fantastic, this seat just goes beyond in both styling and technology.  Corbeau put all of their considerable talent into designing what is probably the ultimate side-by-side seat.

The SXS Pro seat comes with all hardware required to make this a direct bolt-in to the Polaris RZR.  It is also available with a special bracket that will allow this fantastic seat to be bolted directly into the Wildcat with only common handtools.  Installations into other Side-By-Side vehicles are probable but will require some level of engineering.

The support in the SXS Pro seat comes from injection-molded foam.  While this doesn’t provide quite the damage control of the RXP Suspension Seat, it more than makes up for it in aggressive styling.  Injection molding means that this seat will give years of use under harsh conditions where a seat made from cut foam would normally fail.

And look at those harness slots.  Rather than just a hole through which the harness belts pass, these heavily reinforced slots both protect the seat and provide additional support of the harness belts during aggressive driving.

Corbeau thought of everything, even including a drain hold that allows water to drain from the seat rather than pooling in the bottom.  Since Corbeau uses a waterproof seat cover, that means no more soggy bottom syndrome when your UTV is caught in a sudden downpour.

And, maybe most importantly, look at that lateral bolstering in the thigh, lumbar, and shoulder region.  These seats really hold you in place.  You know what work it is to keep yourself upright when driving aggressively.  This seat lets your energy and focus remain on driving–where it should be. 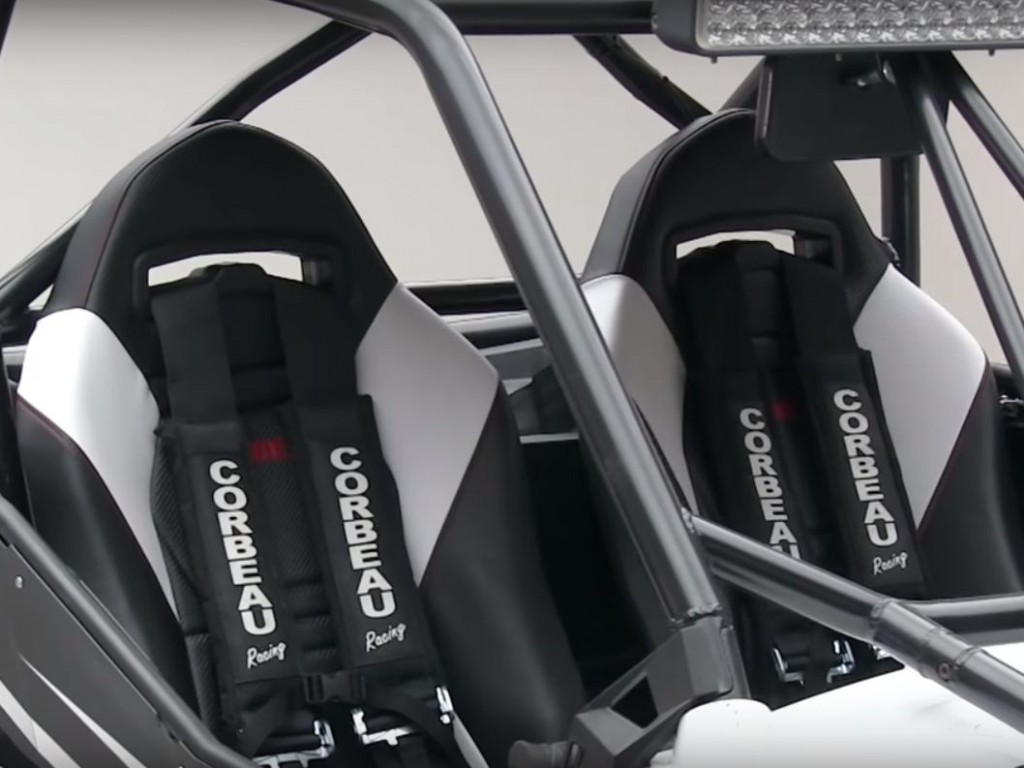 I can give you plenty of reasons for deep, aggressive seat bolsters.  If you’re driving on the edge, beating over harsh terrain, and generally doing everything that the manual tells you not to do in your UTV, you’d better get all of the bolstering you can.

But if you are driving your side-by-side more sanely, deep bolsters can be a pain in the bottom (as well as other parts of your anatomy.) First they can be a challenge to the basic entry and exit of the seat if you are, shall I say, athletically challenged. There there is the simple fact that because bolsters stick out more, they tend to be the recipient of the sort of brushes and scrapes that can damage not only the cover but also the injection-molded foam underneath. 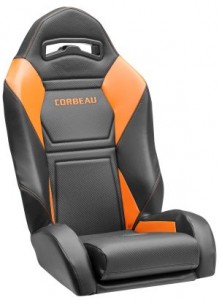 So, it was with you in mind that Corbeau designed their Apex UTV seat. This seat features a silhouette very similar to the factory seat but with just enough bolstering to keep you firmly planted in the seat in the event that you do get in the mix of things. Like the SXS Pro, it is available in all black or with white, orange, or silver accents that match the factory RZR colors. The material is the attractive carbon fiber vinyl that Corbeau has incorporated in all of their most recent seat designs.

But my real interest in the Apex is even far more practical.  You see, I’m sort of a clean freak when it comes to my toys.  I’m that guy that actually cleans his grill after each use so that it is all ready to go the next time I’m ready to cook.  And the Apex makes it easy.  Corbeau has incorporated a quick-release tab to the back of the seat that promises to let you remove and re-install the seat with no tools whatsoever.  So, rather than trying to carefully wash under the Apex, just pull it out, blast your ride with a hose, give the seat a complete once-over, and re-install.  Man, I love it!

Corbeau didn’t have to invent a good bench seat to suit the side-by-side UTV.  For years they are known as the source for the worlds finest suspension bench seats.  Countless thousands of these are already in the outback in Jeeps, mud buggies, rock crawlers, and more.

Corbeau’s Baja Bench Seats are available in 36-, 40- and 42-inch wide versions.  Not all seats will fit all side-by-sides, so if you are interested in adding one of these it is important to measure.  Brackets are available to mount these to any flat floor pan, but Corbeau offers a bracket for their 36-inch Bench that will allow the seat to be directly mounted into the Yamaha Rhino or Kawasaki Teryx.  A broad assortment of colors and materials are available.  Find out for information here:  Corbeau Baja Bench Seats 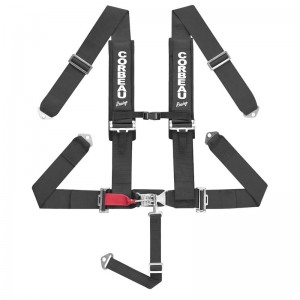 When you are ready to get serious in your UTV, you’d better first get serious about your safety.  While all of the brands offer some nominal safety features, for the hard-core offroader there are the Corbeau Harness Belts for UTVs.

This isn’t some warmed-over harness built for street tuners.  It features not only an aggressive 3-inch design with proven latch-and-link securing technology, but also an additional securing strap mid-chest.  While this normally isn’t necessary in a street vehicle, this chest strap provides an extra level of security when down, up, and sideways are all swapping places at high speed.

Corbeau didn’t sacrifice comfort here though.  These belts have built-in harness pads (try finding that on most street harnesses) and a reduced-size anti-submarine strap to prevent chafing of the more sensitive areas.

Sadly, shortly after we originally published this article, Corbeau suddenly discontinued the production of all products for the Yamaha Rhino.  No reason was given for this change in policy, but one can only imagine it might have been some sort of licensing disagreement.  Having dealt with Corbeau as long as we have, we can assure you that whatever happened that Corbeau took the high road in the situation and did the right thing.  Here is a look at those discontinued seats:

Corbeau has everything you need to not only dress-up of your Side-by-Side UTV, but make it a serious competitor.  Go for it! 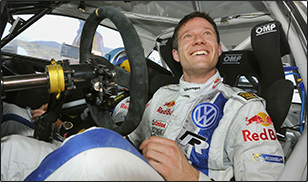